As many people know, the creation of The Hotel Britomart not only involves the construction of a new building, but the reactivation of almost an entire block. One of the exciting things that's happening in one of the heritage buildings adjacent to The Hotel Britomart is the establishment of a new restaurant by acclaimed chef Michael Meredith.

It’s been two years since chef Michael Meredith closed the doors on his eponymous Dominion Road restaurant, Merediths. That restaurant won a slew of awards during its successful run, including Metro magazine’s Best Fine Dining prize in 2016 (as well as the magazine’s Best Restaurateur award for Meredith himself that year), and a three-hat rating in the Cuisine Good Food Awards.

In the last two years, Meredith has been involved in different food consultant roles, including with Eat my Lunch, Miele and overseas work. He’s also enjoyed a break from the day-to-day life of running a restaurant, which has given him time to contemplate this next step.

“I’ve enjoyed some time off in the last couple of years, and that’s given me the luxury of dreaming up a really interesting proposition for returning to the restaurant business,” Meredith says.

In related news, Britomart’s Café Hanoi, owned by Tony McGeorge and Krishna Botica, is moving to the space on Galway Street currently occupied by the nightclub 1885, just across a new laneway from The Hotel Britomart entrance. Meredith’s new restaurant, whose interior will be designed by Cheshire Architects, will occupy Café Hanoi’s former space.

“We’re delighted to add a restaurant created by a chef of Michael’s calibre to our offerings at Britomart, and to continue our long and successful partnership with Tony and Krishna with the evolution of Café Hanoi,” says Matthew Cockram, chief executive of Cooper and Company, the team behind the patient regeneration of Britomart. “It’s been a period of unprecedented growth in the central city, and we’re looking forward to the dynamism The Hotel Britomart and its associated offerings will add to that.”

Meredith says his new venture will be a very different proposition from his last restaurant. “This won’t be a fine-dining space,” he says, “but a more casual and approachable restaurant that celebrates the quality of New Zealand and Pacific produce.”

Elsewhere on the block, innovative New Zealand fashion brands Karen Walker and Huffer are establishing new central Auckland flagship stores as part of the development of The Hotel Britomart.

Karen Walker’s new flagship boutique will occupy the prominent eastern space of The Hotel Britomart building on the corner of Galway and Gore Streets with views towards Takutai Square. Huffer’s new store will be on the ground floor of the heritage Buckland Building; it and the Masonic Building on Customs Street are being refurbished as part of The Hotel Britomart project.

“Both Karen Walker and Huffer are New Zealand brands with a long association with Britomart, and we’re excited by their enthusiasm for the opportunities these new premises offer,” says Matthew Cockram of Cooper and Company. “Their moves to these important retail spaces are positive new steps in a long and productive relationship between their brands and Britomart.”

Karen Walker’s eponymous label is a global success story. The designer regards the new store on the ground floor of The Hotel Britomart building as an opportunity to explore new flexibility in retail by creating a dynamic space that can be easily reconfigured.

“One of the most exciting things about creating a fashion brand is that the retail landscape is always changing,” says Karen Walker. “We’re delighted to be creating a bigger Britomart store that’s all about embracing that dynamism and providing fantastic retail experiences.”

Huffer’s Steve Dunstan, who remembers skateboarding at Britomart as a teen, says the brand’s new Britomart store will showcase the latest stage of the its evolution. “We want it to feel like a community space, not a retail one,” Dunstan says. “We’ve recently spent a lot of time focusing on our core brand offering, and we’re excited that this new store is the first place we’ll be able to express the outcome of all that exploration.” 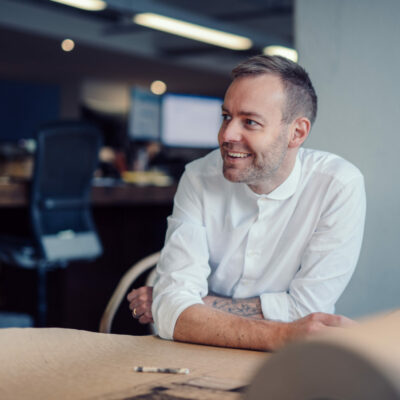