Keeping you safe from Covid-19: Details

New Zealand and sheep are as closely linked within the global imagination as New Zealand and Middle Earth are. But over the past half-century, the country’s sheep-farming industry has struggled against competition from synthetic alternatives and mass-scale farming overseas. Wisewool is a New Zealand-born company dedicated to restoring value to the craft of wool-making through creating engineered ‘wool buds’ – small, bouncy clouds of intertwined strong wool fibres that have high natural resilience and strength.

The Hotel Britomart: Harry, you’re one of the co-founders of Wisewool. Can you tell us a little about your company?

Harry Urquhart-Hay: Our family have been in the wool industry for over 130 years. My great-great-grandfather, W.H. Smith, moved over to New Zealand from Canterbury in the UK in the late 1800s. He realised there was an abundance of sheep farms in the Tairawhiti region, and no one was looking after or taking care of all of the wool. So in 1894, he set about drying the wool on the paddocks of the land that our family still owns today. Little boats would come up the Taruheru River and he would load the wool onto the boats, which would then put the wool onto a larger boat in Gisborne Port, which would be sent over to the UK to be sold. The family businesses survived through wars and depressions and today my cousin Angus and I have just joined the family businesses fifth generation, which is pretty cool. I think it makes us one of New Zealand's oldest family businesses, with Wisewool being a spin-off from that family business.

Can you explain the difference between the strong wool you work with and the wool most people think of when they hear the word – the wool that sweaters are made out of?

Harry Urquhart-Hay: Yeah, of course. New Zealand has a lot of wool and very simply it's broken into two types. Everyone knows about merino wool, which is very fine in terms of its fibre, whereas strong wool is typically a lot coarser. Merino wool only makes up about 10 percent of New Zealand's wool industry while coarse wool or strong wool makes up the other 90 percent. In Gisborne and the larger Tairawhiti region, all of our 300-plus farmers grow strong wool, which is that coarser and thicker variety of wool.

Fifty-odd years ago, strong wool was incredibly popular and would make up most of the farmers' revenue. Back then, strong wool was typically used in curtains and carpets and other things which suit the thicker fibre. But with the rise of synthetics in the last 30-odd years and production powerhouses like China, the price and demand for wool has plummeted. So we set up Wisewool to engineer and add value to strong wool so we can pay our farmers more money for their wool.

When you talk about adding value, how are you doing that?

Harry Urquhart-Hay: Wool has so many wonderful properties that have long been forgotten. It's moisture absorbent, it's hypo-allergenic, has great compressional resilience. It breathes really well as a fabric and material, and a raft of other wonderful things. So we've honed in on the compressional resilience aspect of wool. It's really simply the bounce-back of wool, which makes it a wonderful replacement for synthetics within upholstered goods – furniture, mattresses, pillows, squabs – all things which recently have used manmade fibres. We think there's a wonderful opportunity to engineer our wool to replace those synthetics.

How did Wisewool come to strike up a relationship with The Hotel Britomart?

Harry Urquhart-Hay: We heard a lot about the hotel in the early stages, and what resonated with us was the hotel being New Zealand's first 5-Star Green hotel, and Cheshire Architects's attention to detail and their sourcing of wonderful products with beautiful stories. The project resonated with our family heritage and our family story. The hotel had a need for some high-end daybeds to be used by guests within the hotel, so we went about making these bespoke mattresses or daybeds using our 100 percent Wisewool.

So, those guest room window seats, where guests can sit and look out the window over the precinct to the harbour or into the laneways, those are Wisewool mattresses they’re sitting on.

Harry Urquhart-Hay: That's right. The window seats, if you like, are all about comfort, all about a place of relaxation. And also the opportunity for people rest in a smaller space. We played around with a variety of our different Wisewool buds and casing to make a beautiful, comfortable mattress.

What are the advantages of using wool instead of synthetics in a mattress?

Harry Urquhart-Hay: Wool naturally regulates temperature – when it's hot it keeps you cool, when it's cool it keeps you hot. So it provides a wonderful base as a sleeping environment. The material also breathes really well, so it doesn't harbour sweat and bad odours, like a lot of synthetic materials like foam do. All of our wool can also be traced directly back to farm and is obviously grown here in New Zealand. So it keeps the carbon footprint low.

Wool wouldn’t off-gas chemicals like synthetic mattresses do either, would it?

Harry Urquhart-Hay: Yeah, you nailed it, that’s a big problem with synthetics. And it's funny actually, that when some people purchase a new car, they perceive the new-car smell to be wonderful, but that’s actually chemical off-gassing. Which isn't exactly great. So yeah, there are so many wonderful benefits of wool. We say it's returning to nature's wisdom.

Harry Urquhart-Hay: That's something we've just started to dive into in detail. Traditionally synthetics have been very well-marketed with their ease of use and low cost. But there's been very poor studies on the after-use of synthetics and where they end up and how long it takes to decompose and break down. There's a lot of work that's going on in the wool space to help understand the carbon footprint and the profile of wool, which we're starting to get involved with. We've begun quite exciting conversations with Toha who are based in Gisborne, who are doing a lot of work in the regenerative farming space.

And in the bigger picture, this is helping New Zealand sustain the wool industry that's been a core part of the economy for many years.

Harry Urquhart-Hay: Yes, it's about time wool returns to its rightful place. It’s such a beautiful, natural, sustainable fibre, and our engineering process will add value to put more revenue back in farmers’ pockets. And that will have a massive flow-on effect. We collect wool from well over 300 large farming families all up and down the East Coast. By adding value to the wool and providing our farmers with more revenue, it will create an abundance of jobs for the community. It will help with community growth. I think it's an incredible exciting time moving ahead for New Zealand wool. There's a lot of research and development, and entrepreneurs working in this space. With Wisewool, we’re really lucky to have a great family legacy and resources available to really push that forward in a big way. So, I think it's a really exciting time for the industry. 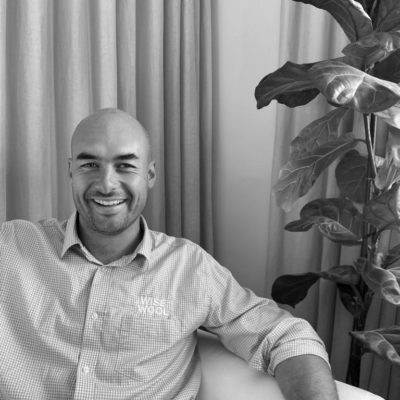